If you read last week’s Part 1 installment, you know that I’m having a look at my favorite behind-the-scenes utilities for flight simulator. These are the workhorses of ‘simming; programs that work their magic in the background and make every flight you take just a little bit better. This week, two more that I consider indispensable:

This little program is so discreet, it doesn’t even run while you’re using FSX. Yet every time I launch a flight now, whether testing scenery or doing a cross country flight for fun, I load it first.

What it Does
If you’re into tweaking, you’ll want this program. It’s basically a graphical user interface for making changes in your FSX.cfg, the master file that controls almost all aspects of how FSX is set up. Of course, tweaking that file directly isn’t hard to do, so you might well ask why would I pay for a GUI to change an already simple text file? The answer, in a word: flexibility.

I’m sure a few hardcore and dedicated ‘simmers are so focused on creating a real-world scenario that they never deviate from their one aircraft. These are the guys who don’t fly in their sim unless using real-world weather, so thunderstorms ground them in virtual life the same as in real. If you’re one of those, you can probably skip this entry and move on to the next utility. However, if you’re like most of us, you enjoy flying a wide variety of aircraft in FS, in equally diverse locations and situations.

Let’s face it, FSX is a demanding program on computer systems. In order to get the most out of it in a given aircraft/weather/location/time of day combination, you might have to tweak your settings for maximum fluidity. Complex airliners require more horsepower, so many tube fliers find they have to dial back autogen or change scenery complexity settings to suit their plane choices. On the other hand, light GA pilots tend to fly planes that are gentler on a system, and they do it low and slow to see the scenery. For them, things like autogen density, terrain mesh resolution, and level-of-detail radius are much more important.

One of the areas in which FSX Go shines is in allowing quick, wholesale changes of FSX settings to accommodate these different modes of flight. It does this through a system of profiles, each of which comes with its own set of FSX.cfg settings. For instance, in my copy, I’ve got profiles for scenery testing (most sliders set to full right, as I’m looking for how my work looks and performs under a heavy system load), for flying (some sliders dialed back for fps fluidity), and for special cases like night flight (very little autogen, and water set to low settings, since you can’t make out the enhancements in the dark anyway). Activating any one of these is as simple as double-clicking it, and voila! The settings in FSX change, and the flight launches.

The way FSX Go works is by adding or removing specific entries in your fsx.cfg file. If you don’t specify a particular entry, it will default to however it’s set in your current fsx.cfg. If you do, it overrides that setting, applying a new one. This is accomplished by adding cfg rules from a master list of those available – you don’t have to memorize the specific wording of the rule you want to change – and setting the value from the simple form that’s presented. If I want to change my autogen settings for a particular profile, for instance, I go to the master list and choose “AUTOGEN DENSITY” under the “TERRAIN” section and add it to my profile. Then I choose my desired density from the drop-down list and save the profile. The next time I fly with this profile, that’s how it’ll be set in-sim.

How It Makes Flying Better
We’re all looking for the best frame rates we can get, a goal that can be elusive. FSX Go allows you to tailor virtually every setting in FSX to match your choice of plane and situation, giving you the best performance you can get for a given combination.

One other nice addition is that you can associate a particular flight file (.FLT) with a profile as well. So for my night flying, the profile doesn’t just switch my settings, it drops me onto the cargo ramp at KPDX in a loaded 727-100 freighter, engines running and ready to taxi. That’s a couple more minutes I have to fly instead of wading through flight loading screens.

How Much and Where to Get It
The developer of this nifty little program is a household name in FS, but for other reasons: Orbx Simulation Systems, the guys who bring you the FTX scenery series. The price is right, at just AU$9.90. For more information, see the official product page on fullterrain.com.

This is the newest utility I’ve got, and I’ll be the first to admit that I haven’t fully explored it yet. What I have seen is exciting enough for me to already include it in my list of must-haves for FSX. 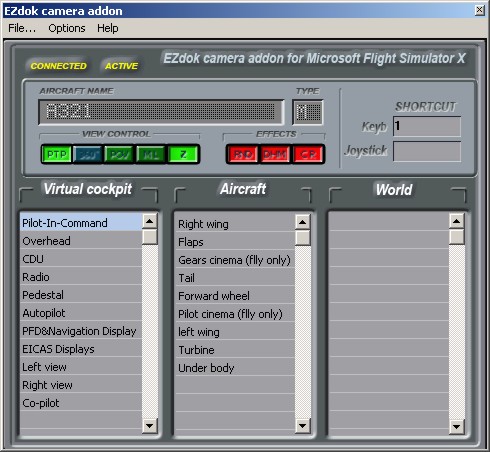 What it Does
The various views in FSX are driven by a system of “cameras” which determine where the user’s point of view is at any given time. You can be inside the VC, or looking at a 2D instrument panel, floating above the plane in flight, or even watching it from the ground. EZCA, as near as I can tell, is a complete replacement for this camera system.

This utility takes over all viewpoint, head movement and head latency functions in FSX. It stands between you and your controller/keyboard view control inputs and the sim, doing what the camera system in FSX did, but adding a lot of great bells and whistles. 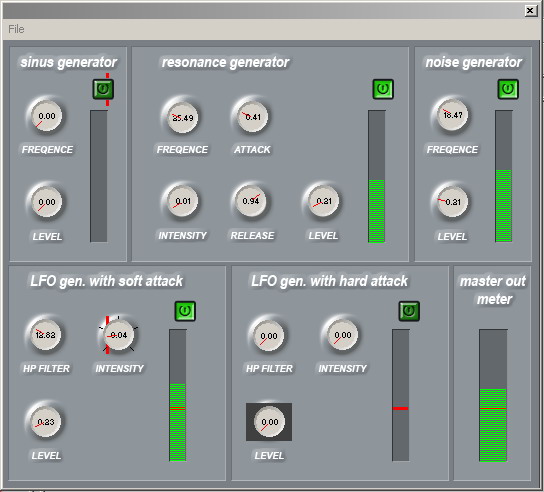 The default aircraft come with their own EZCA cameras pre-defined, which is a great place to experiment and get to know how the program works. Once you’ve gotten it set up and are used to how to manipulate the views, you can move on to setting up your own cameras in your favorite add-on planes. There’s nothing particularly complex about any of this, but the user interface is sometimes less than intuitive. Once you get a handle on how the developer expects you to use it, it’s a snap.

Disclaimer: I am a die-hard TrackIR head tracker user. I’ve had one since version 1.0 a few years ago, and I’d have a hard time flying without it now. When I first heard of EZCA, it was cast as a replacement for TrackIR, so I gave it a pass without so much as a raised eyebrow. You don’t mess with my TIR, and you definitely don’t replace it. With version 1.15 of EZCA, however, the two go together like peas in a pod, extending and enhancing one another beautifully.

With a TIR/EZCA setup, you get the best of both worlds. You still use your own head movements to control the cameras in FSX, but those cameras can be an infinite number of custom-built EZCA views. Then there’s the crown jewel of EZCA: the head latency system. It’s hard to describe, but essentially it’s a visual representation of the forces that act on your body in flight. Taxiing down a turf runway, the plane will seem to bounce about on the grass. Same thing for turbulence, which can get downright nausea-inducing if it’s heavy. The impact of landing is greatly enhanced as well, with violent shaking if you just clap the wheels on the ground instead of making a nice, smooth “greaser”. This video demonstrates the effect far better than I can with words:

The way you set up EZCA with TrackIR involves essentially disabling TIR support within FSX, and letting EZCA be the “game” that TIR sees instead. Maybe I’m imagining it, but it seems to me that EZCA’s handling of TIR is smoother than I was getting in plain old FSX. The result is that my frame rates seem improved because my head tracking is more fluid, even if the technical FPS rate is the same. That’s a big win.

I’ll do an in-depth review of EZCA soon, but for now, I’m giving it an unqualified thumbs-up.

How It Makes Flying Better
EZCA is the best add-on that I never knew I needed. It makes setting the viewpoint and fine-tuning it a snap, and includes new dynamic head movements that make virtual flying seem an order of magnitude more real. Plus, in version 1.15, it works seamlessly with TrackIR, expanding the head-tracking abilities and smoothing the performance. I hear it’s got some great options for sim movie makers as well, but I haven’t explored those features just yet.

How Much and Where to Get It
EZCA is sold through Flight1 – visit the product’s home page – for US$35 and supported through its own dedicated forum. The developer seems gregarious and very involved in the community, which is no small feat as English is not his native language. You can tell a lot about a product by how well it’s supported, and the forum speaks very well indeed of both the software and its creator.

That’s all for now. As I said, look for a more in-depth review of EZCA soon, as I think it merits its own post. Until then, happy flying!

Comments on this entry are closed.

Next post: Orbx Extends “May Madness” Sale to PNW Products